In this episode from my podcast “You’re still going to die” I invited my dear friend Agneta to talk about different kinds of love and our capacity to forgive others. I hope you enjoy it!

I recently started my podcast: “You’re still going to die” where we talk about the best ways to navigate this life and many other spiritual topics, especially one that nobody wants to talk about and it’s the most inevitable thing in life: Death.

What for many may sound terrifying, once you embrace and understand the reality of death, it can be the most liberating experience.

In the first episode we asked the question “What is our relationship with truth?”, where my dear friend Richard and I talk about what does it really mean to seek the truth and how can truth be part of our daily life. I hope you enjoy it. 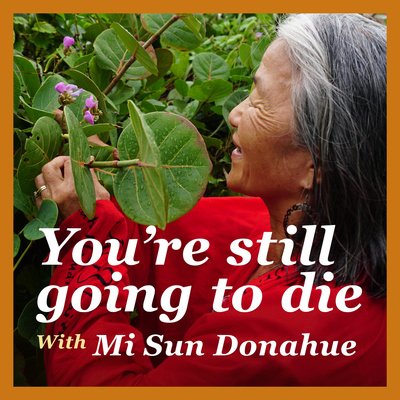 We all know that we are going to die, but most of us forget this powerful realization in our daily life. How would it be to live a life where every day we embrace the fact that we are all temporary glimpses on this earth.

Richard Hunnewell shares how Mi Sun’s book made a huge impact on his life. Find out more about Mi Sun’s memoir here: https://link.misuns.com/book

I’ve been teaching yoga for 11 years. I have worked with many Yoga students, and it never ceases to amaze me how so many of us worry about what others think. Even my students who are in their nineties still worry what others think of them.

When teaching in-person yoga classes, I will often notice students finding a place in the back of the room. I invite them to move closer. I ask, “Why are you in the back when you can be in the front?”

“Oh my goodness!” I will say. “At my age, and at your age…we’re still here. Somewhere along the way, self-consciousness came into play when we were children. And at this age, you are still concerned about what other people think of you.”

And what a waste of time, I say to myself.

But these wounds still happen.

When we were children, we became self-conscious, and it seems we kept carrying this all along. So, I find myself telling my yoga students, “Can you just let it go? Can you breathe into it?”

Because you’re not the same person you were fifty years ago, seven years ago, maybe even ten days ago…or only one day ago.

And this is an aim we can incorporate into our daily yoga practice…starting today.

One day, Yolanda, who is 85 years old, came into my yoga class. She is one of my students and claims to be a French Countess. She appeared very agitated.

“Not too good,” she told me. “I am not feeling very well, and I have not slept much lately, but you will make me feel better, won’t you, darling?”

Then she pointed at her favorite spot on the floor, where someone had already placed their yoga mat. She said, “I want to be there,” adding, “so I can be closer to you.”

“Yolanda, that spot is already taken,” I said, “but we have lots of other spots.”

Despite this, she continued to insist she wanted to be in that spot.

“Why don’t you set your mat in front of that spot, and then you can be even closer to me,” I suggested.

Still, she kept insisting she wanted that spot. I said to her, “Yolanda, I am sorry, but you cannot have it. It is already taken.” I was not going to ask someone to move their mat, simply because this little old lady was having control issues. Especially not in a yoga class, where we are trying to learn to let go. We were not doing so well at that. I thought this seemed so absurd, and I could not believe what I was seeing or hearing.

At that point, the student who had that spot said, “I can move. You can have the spot.” She moved her mat and let Yolanda have what she wanted.

After the class ended, I asked Yolanda to stay for a little while. I asked her why was she so agitated, and she said she hadn’t been sleeping much lately. When she did go to sleep, she woke up frequently during the night.

“Do you have any idea why?” I asked her.

Then she started to tell me of all the physical discomforts she was having.

I then asked her, “Have you seen a doctor to find out if there’s anything to be concerned about?”

“Yes,” she said, “and the doctor said everything was fine.”

At one point, I asked her to close her eyes and take a couple deep breaths. After a while, she seemed a little calmer, and she looked at me and said, “I guess I am afraid of dying.”

She looked perplexed by my answer. I don’t think she was expecting the response she got. “Yolanda, did anyone ever tell you this was a permanent gig?” I said. “You know, life is temporary, and all of us are going to die. It is not if we’re going to die, it is when we’re going to die. Even though you are older than me, who’s to say I will make it home today? You know, my mother died when she was 27. I could die on the way home today. And you could still be here. That is how life works. Most of us don’t know how long we will live, but to waste our precious time with worrying about things we cannot control is just waste of your life and time. You may even live to 100. Who knows?”

She was quiet for a little while, and then a smile came across her face. She got up and told me she was going to the gym to ride a bike for an hour, and she asked me if I would like come visit her in France sometime.

Before I left the condo complex, I stopped by the gym to see how she was doing, and to say good-bye to her. She was smiling and riding the exercise bike. The following week, she went back to France for the summer.

I could have given Yolanda the usual standard response we give to people most of time, when we are confronted with uncomfortable subjects such as death and old age. But this is one subject that I am at peace with. I have been living with and have studied this subject for most of my life, due to losing my mother at age three.

I am trying to stop the struggles in my mind, and in my heart. I realize the more I struggle, the more I suffer. The characters in my story change. The scenery changes, but still I struggle with the same issues, over and over. I think it is different, but it is actually the same story. I am older, and the problems are larger and more complex. There are larger consequences than when I was a child.

We carry our grievances and disappointments as if they were some kind of treasure, not willing to let go of them even when they are drowning us. Even when the end is near we still struggle to hang on to our pain and sorrows, refusing to let them go.

What if there is life after death? What if there is life after life? Coming back, doing the same thing over and over again? Expanding our karma again and again for lifetimes. Not realizing that if I want my life to be different, I have to live my life differently. I cannot do the same thing over and over expecting different results. This is the insanity. We have all been living this way for a long, long time. All of us have been perpetuating this, the same storyline for ages. It seems this is the story of the human condition.

Now I can see clearly the stories of our lives, the story of my life, our delusions, our confusion, and our insanity.

I will let go of these struggles and I will battle no more.